Ideas to Green your Lifestyle

According to the United States Environmental Protection Agency, raising animals for human consumption is the single largest source of human methane emissions. While methane does not stay in the atmosphere as long as carbon dioxide, it is a far more powerful greenhouse gas. Thus, over a 100 year period, pound for pound, methane is approximately 25 times more potent than carbon dioxide as a greenhouse gas.

Raising animals, especially ruminant animals such as cattle, sheep, goats, are destructive to our environment in three main ways. First, these animals essentially burp methane. Through a process known as enteric fermentation, ruminant animals produce methane when microbes in their digestive tracts (known as rumen), decompose and ferment their food, Second, the manure produced by these animals also produces methane. Together, the manure and the enteric fermentation comprise the single largest source of methane emissions related to human activity. Third, the land cleared to raise these animals destroys millions of acres of natural carbon sinks (often forest) that would have sequestered the carbon that humans are producing. Fourth, the energy and water used to grow food for livestock, and then transport and process these animals, accounts for approximately half (3.5 gigatonnes) of the more than 7 gigatonnes of CO2 equivalents produced every year through livestock production.

Beyond all that, from a humanitarian standpoint, raising animals in modern corporate farms creates a hell-on-Earth nightmare for billions of animals, from chickens, to pigs, to cattle. If you are brave enough to watch the movie Dominion, then you can get a thorough, inside view of the pain and suffering endured by millions of animals every year just so humans can consume animal protein. If you're not quite brave enough to watch Dominion, then the animated video entitled The Meatrix also does a fine job of conveying some basic facts about raising livestock.

Given that raising livestock is estimated to account for between 13% and 18% of human GHG emissions, eating less meat, or even transitioning to a vegan lifestyle, is definitely one of the quickest, easiest, and cheapest actions that people can take in order to combat climate change.

See the Activism Blog on this site to explore quick, easy vegan recipes, and start your transition to a vegan lifestyle today! (Click on the "Vegan Lifestyle" filter in the right-hand menu.)

Although aviation is a relatively small industry, it contributes a disproportionately large amount of CO2 into the atmosphere. Estimates from the IPCC suggest air travel accounts for about 2% of anthropogenic CO2 emissions. However, air travel has an even greater impact on climate change because of other, non-CO2 emissions, such as nitrogen oxides. Together, aviation emissions are estimated to comprise between 4% and 8% of total anthropogenic contributions to greenhouse gases (Lenzen et al, 2018).

As a specific example of air travel's impact, "An economy-class return flight from London to New York emits an estimated 0.67 tonnes of CO2 per passenger... That's equivalent to 11% of the average annual emissions for someone in the UK or about the same as those caused by someone living in Ghana over a year" (Climate Change: Should You Fly? 2019)

Moreover, in a time when we desperately need to reduce our emissions, demand for air travel continues to grow (Tabuchi, 2019). So the next time you're considering a vacation, please explore some local destinations that you could travel to by EV, train, or boat.

Navy showers are a method of showering that allows for significant conservation of water and energy. An initial thirty seconds or so are used to get wet, after which the shower is turned off. This is followed by soap and lather, which is then rinsed off in a minute or less. The total time for the water being on is typically under two minutes.

Navy showers originated on naval ships, where supplies of fresh water were often scarce.  The idea has been adopted by many people who wish to conserve water and the energy needed to heat the water, for both environmental and economic reasons. A ten-minute shower takes as much as 230 L (60 U.S. gallons) of water, while a navy shower usually takes as little as 11 L (3 U.S. gallons); one person can save 56,000 L (15,000 U.S. gallons) per year!

See: The Conservation Balancing Act: Part II. In the Bathroom

Recycling is an easy and effective way of reducing stress on our planet's increasingly limited resources. Read your municipal guidelines to ensure that you're recycling only the correct materials. Other than that, recycling is simply a matter of habit... and it's a very good habit to get into.

To my mind, farmers are the great unsung heroes of civilization. Without them, civilization simply would not have developed. Ironically, the very civilization that agriculture gave rise to now threatens the land and resources that we need to grow our food in a healthy and sustainable way. There are still farmers amongst us, however, so get out there and support them! Don't quibble over price if you end up paying more for locally produced fruits and vegetables. You aren't just paying for the produce, you're paying to keep local farmland allocated to its current agricultural use. Otherwise, that land will be converted into commercial and residential properties, and there will be less farmland available. Moreover, the farmland that is available won't necessarily be local. Thus, we could all very easily end up paying more for produce that needs to be shipped greater distances. That's not good for the environment or your pocketbook.

Watching television not only consumes precious electricity, it is both unproductive and psychologically addictive. How many times have you heard people say, "I need that television at the end of the day to help me decompress"? That's the equivalent of saying, "I need that cigarette to help me relax." Of course, we know that the cigarette does nothing to help one relax. Rather, it is simply the temporary satisfaction of a physiological addiction that momentarily reduces stress. Without the addiction to nicotine in the first place, the cigarette would have absolutely no impact on one's mood or disposition. The same can be said for television. It is the satisfaction of the addiction that brings about the stress relief. If you don't believe me, try physically removing your television for a few days. At that point you will quickly and profoundly observe the degree to which you were addicted to television. The good news is that you can just as easily become addicted to something that is healthy, productive, and uses less electricity. (See "Green Fun" below.) Networks and big corporations won't like losing you from TV land, but society and the environment will be very happy to have you back in the real world.

This is easy and very effective. Just follow these steps: 1. Talk to the people you work with. Find out who lives either: a) close to you, b) between you and work, or c) in a location that has them driving by where you live. 2. Propose car-pooling to individuals who comply with any of the above scenarios. 3. Suggest that you drive one week, and they drive the next. Bingo! You just cut your gas costs and your fuel emissions in half! If you can get three or four individuals into a given car-pool, all the better. Guess what... car pooling turns otherwise boring commutes into fun social time as well. It's definitely a win-win scenario!

Feel free to challenge your colleagues to take the #GreenNeighbourChallenge by carpooling to work starting tomorrow!

Video games... what a pathetic waste of time. Playing video games not only consumes precious electricity, it does nothing to improve one's physical health or develop meaningful talent, skill, or ability. If you think playing some phoney electronic toy guitar is fun, imagine how much fun playing a REAL guitar might be! If you think playing some game of virtual soccer is exciting, imagine how exciting playing a REAL game of soccer would be. Video games have probably done more to hinder the prospects of Generation Y than anything else. Name something else that gives someone a completely artificial sense of accomplishment while at the same time preventing them from socializing, developing actual talents and skills, or getting exercise.

"Start with the hardest thing." That's what environmental activist Franke James decided to do back in 2008 when she convinced her family to give up their car. This woman and her family are a real inspiration. A lot of people talk about the environment, but it's walking the talk that will actually make a difference. In a world of talkers, Frank James is a walker! Learn more about this incredible woman and her unique approach to environmentalism at www.frankejames.com

Gas cars are horrible for the environment, they're unreliable, and they're extremely costly to both drive and maintain. Even the most fuel-efficient gas car still costs the average driver thousands of dollars in gas over a year. They cost hundreds or thousands more in servicing, and, as incredible as it might sound, a single bad spark plug can leave you stranded and end up costing you $400.00 in unexpected repairs! Just take a look at the repair bill below if you don't believe me. This is the bill that resulted from a single bad spark plug that prevented my 2012 Honda Civic (the most popular car in Canada) from starting on Boxing Day, 2016. The car only had 55005 kilometres on it, and, as you can see from the servicing invoice, the car was still under warranty... but not the spark plugs! The car's failure to start caused flooding in the engine, which apparently caused gas to get into the oil. Thus, the oil also had to be changed. All-in-all, the damage to my pocketbook was just over $400.00, all from a single bad spark plug. That's the kind of nonesense that can happen with a gas car at any moment, even with one of the world's most reliable cars. 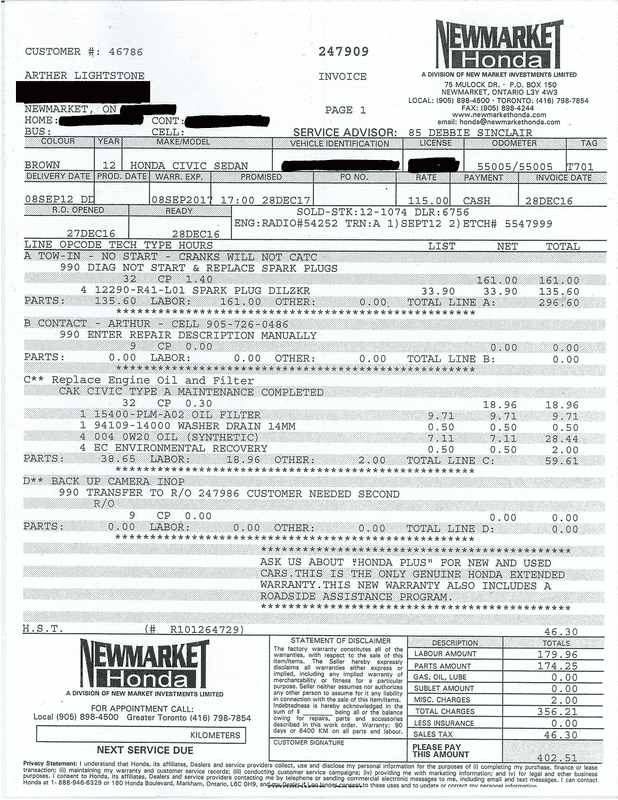 Try this fun little activity the next time you're out walking - especially if you have young children. Simply bring a bag with you on your walk. Then start collecting the pieces of litter that you pass on your way back home. Your little ones can either get in on the action of collecting, or, if they're too little to walk, they can just sit in the stroller or wagon and point to the pieces of litter that they spot. Either way, you can award points for pieces of litter collected or spotted, and then reward your kids with a treat when you get home. This is a surprisingly satisfying activity and it's quite effective. Once you do this on a given walk, the next walk along the same route will be much cleaner. You will find that people are far more hesitant to litter in areas that are not already full of litter.


​Avoid Using Single-Use Plastic, and Recycle the Plastic you do Buy

Plastic does not biodegrade, so, essentially, it stays around forever. That's the problem with plastic in a nutshell. Given that it stays around forever, it eventually ends up in the oceans, in the soil, and in our bodies (as microplastics). Just like everything else, plastic also requires energy to produce. Beyond that, plastic specifically requires oil to produce. In fact, some estimates suggest that about 8% to 10% of oil is directed towards the production of plastic. Bottom line: plastic - in any form - is a terrific thing to avoid purchasing.

There are plenty of ways to have fun without using electricity. Television and video games are not only completely unproductive, they are psychologically addictive and they consume electricity. Try giving yourself a break from these forms of recreation by exploring some of the many green ways to have fun. You'll find that green ways of having fun are not only environmental, they tend to be healthier and more social.
​Ideas to green your home

Project time: 3 - 8 hours
Level of difficulty: varies; in places this can be quite difficult
Tools required: scissors
Materials: ductwork tape

Tune Up Your Furnace